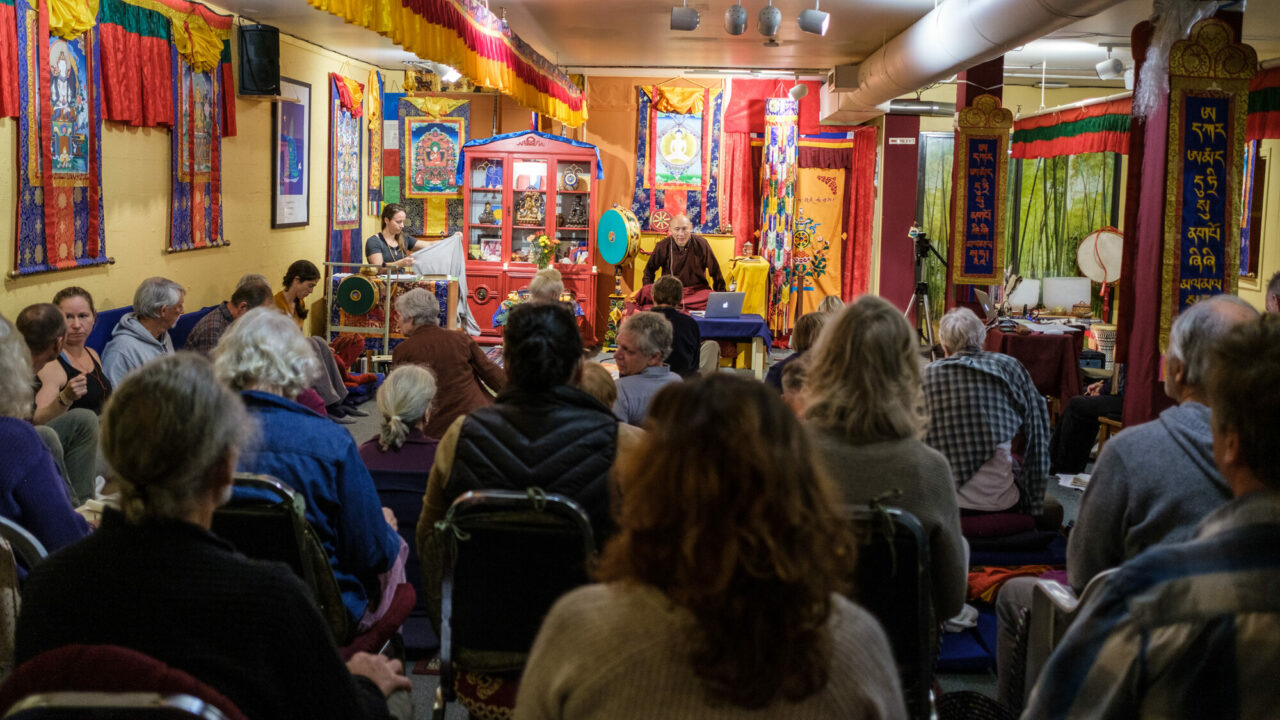 Geshe YongDong (GesheLa) began teaching small groups of students from his home in Courtenay B.C. in 2002. The classes quickly grew to an average of 10-12 on a weekly basis, and workshops held in the tiny living room regularly attracted 15 – 18 students. After many requests to have drop-in meditation practice and more workshops it became evident that we needed a larger space for our Courtenay sangha.

Several dedicated students and sangha members, committed themselves to pay a monthly annuity towards the rental of a room for a centre. The necessary paperwork was completed to create Sherab Chamma Ling and after a long search, a rental room was agreed upon. Donations paid the rent and any maintenance items needed for the upkeep of the centre. With the help of caring members, our centre had become a reality.

We began to create the Tibetan Bὄn Buddhist Society in November 2005 and the first AGM was held in February 2007. Our first executive was elected and to many this was our first experience with a society, so it was and continues to be a learning process for all of us. The Tibetan Bön Buddhist Society is a registered non-profit, tax-exempt charity administered by volunteers.

It took a few more years and paperwork, but we finally received our Tax Revenue number from the B.C. government and we were then able to give tax receipts for donations. Regular business meetings are held once every four months and the Annual General Meeting of the society is held yearly in February.

More information on and about our Society can be viewed here. In 2008, a new, larger and more central location was found for our centre on 5th Street at England, right in the heart of Courtenay.

Students and sangha members formed work parties and spent many hours cleaning the space, hammering, painting and completing all the other necessary jobs to get the centre ready.

On the 28th of September 2008, we had our official opening to the general public.

Our centre hosted meditation practice, weekly teachings, Ngondro practices and special sangha social events on a regular basis. In addition, it was used to hold business and AGM meetings; GesheLa held spiritual and astrology consultations and several fund raising committees had used the space to meet and carry out fund- raising projects such as making prayer flags.

The centre assumed the responsibility of hosting the two annual weekend teaching retreats, which turned out to be an overwhelming success. Sherab Chamma Ling has hosted several visiting monks from other centres and from the Tibetan Bön monastery Menri in Dolanji India.

Sadly, though, due to the Covid-19 pandemic, we could no longer use our beloved centre anymore and in November of 2020, we made the difficult but necessary decision to move out of our physical space. One day, it is our plan to have a physical space again, but until then, you can join us every Tuesday night online via Zoom.

In addition to teaching at Sherab Chamma Ling, GesheLa has traveled on a regular basis to teach other groups of students at different locations on Vancouver Island and the mainland.

These include groups on Quadra Island, Cortez Island, Gabriola Island, Nanaimo and Pt. Alberni, as well as talks and day workshops at the Vancouver Island University in Nanaimo, B.C. GesheLa travels regularly to teach in the U.S. at the Yeru Bon Center in L.A. and at the Ligmincha centers in Charlottesville, Virginia and Houston, Texas. He also teaches in Costa Rica and Colombia, and several countries within Asia. Watch GesheLa’s video recordings of some of his teachings on our YouTube channel.

All activities of Sherab Chamma Ling and GesheLa can be found on our calendar. The calendar is updated on a regular basis and includes the date, location, and topic of teaching and other information.

Our prayer flags can now be found hanging in several different parts of the world! In addition to prayer flags, our centre sells several Dharma items including practice booklets, Tibetan Bon Thangkas, Malas, wall hangings etc. GesheLa has recorded a few CD’s of his teachings and chanting which are available for students.

Our Society continues to survive on the support and donations of students and friends. Without the generous assistance and encouragement from these kind people we would not be able to offer the sacred Tibetan Bὄn teachings.

We thank you all very much.

If you would like to help us to continue and reach the goal of building a permanent international meditation/retreat centre here in Canada, please click here to visit our donation page.

The main goal of GesheLa, the Society and Sangha members is:

In addition to this, the Society has the following goals:

A sincere thank you to H.H. Menri Tritzen, H.E. Nangzhig Kabygon Rinpoche, GesehLa’s root teacher – Venerable Gyaltshab Tenzin Wangyal Rinpoche and all the Bön monks of Menri, Nangzhig and Norbutse Monasteries, who have said many chants and prayers and offered good wishes and help in the establishment of our Society.

View Calendar
View Calendar
Go to Top
We use cookies on our website to give you the most relevant experience by remembering your preferences and repeat visits. By clicking “Accept All”, you consent to the use of ALL the cookies. However, you may visit "Cookie Settings" to provide a controlled consent.
Cookie SettingsAccept All
Manage consent

This website uses cookies to improve your experience while you navigate through the website. Out of these, the cookies that are categorized as necessary are stored on your browser as they are essential for the working of basic functionalities of the website. We also use third-party cookies that help us analyze and understand how you use this website. These cookies will be stored in your browser only with your consent. You also have the option to opt-out of these cookies. But opting out of some of these cookies may affect your browsing experience.
Necessary Always Enabled
Necessary cookies are absolutely essential for the website to function properly. These cookies ensure basic functionalities and security features of the website, anonymously.
Functional
Functional cookies help to perform certain functionalities like sharing the content of the website on social media platforms, collect feedbacks, and other third-party features.
Performance
Performance cookies are used to understand and analyze the key performance indexes of the website which helps in delivering a better user experience for the visitors.
Analytics
Analytical cookies are used to understand how visitors interact with the website. These cookies help provide information on metrics the number of visitors, bounce rate, traffic source, etc.
Advertisement
Advertisement cookies are used to provide visitors with relevant ads and marketing campaigns. These cookies track visitors across websites and collect information to provide customized ads.
Others
Other uncategorized cookies are those that are being analyzed and have not been classified into a category as yet.
SAVE & ACCEPT
This site is protected by reCAPTCHA and the Google Privacy Policy and Terms of Service apply.